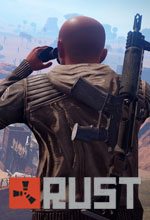 Rust is a MMOFPS game developed and published by Facepunch Studios with Unity game engine which can be played on Steam, met gamers in 2013 year.

As Rust is a paid game, you have to buy first to play. All players have equal rigts (weapon, superiority etc.) in the beginning of the game.

Due to the violence it contains, it is recommended for 16+ age gamers. It has Medium level quality and High degree playability.

Giving the joy by gathering Action, Adventure, Sandbox, Shooter, Survival types and having rich content, it allows to make single or team based skirmish.

In order to get into the game and fight with real players in full action, you can buy the Rust game with a suitable price, immediately download and create your character.