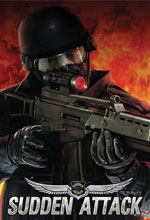 Warning
GameTürk has decided to stop the services for Sudden Attack.
+ Other GameTürk games.

Sudden Attack is a MMOFPS game developed by with game engine and published by GameTürk met gamers in 0 year.

Due to the violence it contains, it is recommended for 18+ age gamers. It has Medium level quality and High degree playability.

In order to get into the game and fight with real players, you can create your character by signing in and download Sudden Attack.